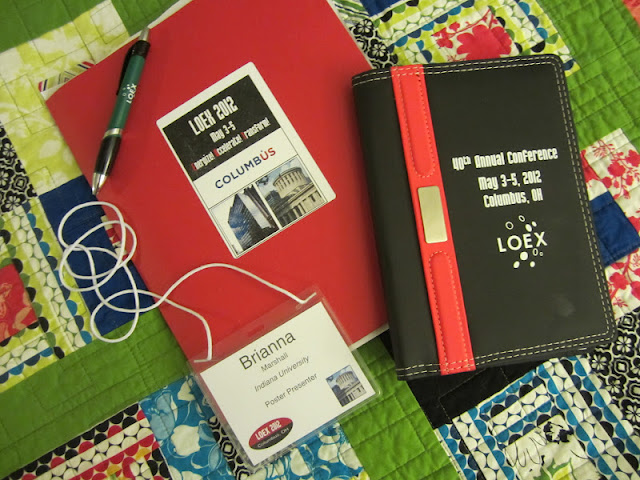 As you likely surmised from this post’s title, today I’m FINALLY posting about my experience at LOEX. (I’ve been writing this post for awhile now, so it’s about time.) LOEX stands for Library Orientation Exchange, which, if your brain works like mine, doesn’t really tell you anything. The least helpful acronym ever necessitates a translation, so: LOEX is the main instruction/teaching and learning conference of the library world. It was only three weeks ago, but it feels like three months ago to be honest. Time has zipped along at warp speed but I’ll take a peek back to share my experience.

Anyone who has been reading this blog for a while may recall that I began using Google and Wikipedia in my instruction sessions this past fall. I found that it helped me relate and connect to students who were otherwise zombified and bored senseless at basic “here’s how you use a database” instruction. I then proposed a poster on some of my methods of integrating the student favorites into the classroom, and lo and behold, it was accepted by LOEX.

As I discussed in my previous post on the Society of Indiana Archivists Annual Meeting, I was uncertain about whether my ideas for incorporating Wikipedia and Google into library instruction sessions would be useful to other librarians. Did they already do something similar? I soon realized that I had no clue how instruction worked at institutions beyond IU and my alma mater, the University of Wisconsin-La Crosse. What sort of students do other instruction librarians teach? How do they structure their sessions? Rather than feeling nervous, I swiftly grew excited to talk to the mysterious instruction librarians out there.

The weekend before LOEX, I physically created my poster and handouts (inclusion of an elephant graphic definitely my favorite part!). In a marathon session the Monday preceding the conference, I printed my poster on the plotter and my 200 handouts on the regular printer.

I was lucky enough to be carpooling with my dear friend Sara to LOEX, which was in Columbus, Ohio, this year… about a 3.5 hour drive from Bloomington. Sara was the Teaching & Learning Department graduate assistant (and now a newly hired librarian at the University of Northern Colorado! nice!), so I’ve known her for my entire graduate career thus far. She talked to the new Instruction Assistants at our initial training and she was the IA I chose to observe before teaching a class on my own. I love to tell her that she taught me everything I know! I think we were both pleased to have a partner in poster sessioning. “I’M SO GLAD YOU’RE DOING THIS TOO!” was a frequent outburst made during the car ride to Columbus.

I wasn’t nervous, per se, but I wasn’t sure what to expect. At conferences you have to be “on” to a certain extent: ready to socialize, mingle, impress. Especially as a newbie to the library world, I wanted to avoid being lackluster if at all possible. After SIA the previous weekend, final projects being due, then rushing right over to LOEX, the timing was a bit unfortunate because my energy levels were sagging. Luckily, Sara and I were both in similar mindsets and we were able to keep each other amused with plenty of self-deprecating humor.

The conference hotel (the Renaissance in downtown Columbus) was so posh! I’m sure my jaw just about dropped. I felt every inch the broke grad student as I took it all in, swiftly deciding to mentally reframe LOEX as a mini-vacation. Sara and I found our room and I met Laura, a SLIS grad now working in Kentucky who we were rooming with. Later that evening we met up with a handful of other conference attendees and went out to dinner a few blocks away, a charming spot called Elevator.

Fast forward to Friday morning. We woke up and I immediately noticed that my hair, damp when I went to sleep, had expanded into an unruly mane overnight. Consensus: nothing to be done about that. Sara and I then ate a quick breakfast and scurried to the room holding our posters hostage. I hadn’t met any of the other poster presenters and I was curious about them. I secretly wondered if this would turn into an Encyclopedia Brown-esque mystery wherein poster presenters from one institution would sabotage another institution’s posters. (Didn’t happen. I mean, I didn’t want my poster to be sabotaged or to commit sabotage myself, but it still could have been exciting.)

Sara and I commenced to using tacks and binder clips, respectively, to affix our glorious creations to the LOEX-provided cardboards. Classy, indeed.

When our posters were ready to be brought to the lobby area at the correct time, we were able to make our way back upstairs for breakfast take two and Char Booth‘s plenary speaking session, which I would not have missed for the world. She is stellar. Like anyone else who has ever heard her speak, I am awed, refreshed and inspired by her. She combines raw insight, humor, instructional theory and graphic design into this overall package of amazingness. She also gave my supervisor/mentor Carrie Donovan a shout-out during the plenary session! In front of the majority of instruction librarians in the country! I will never be as awesome as Carrie, but I’m thrilled by the fact that only two degrees of separation exist between Char and myself!

I met her for the first time last year when I went to the Wisconsin Association of Academic Librarians conference, where I ran into her in the elevator, recognized her, and struck up a conversation. The best part about LOEX was that this scene was recreated in part when I walked into an elevator that contained Char… plus about seven other people jammed in. I didn’t think it was the best moment to fondly recollect about our last elevator encounter and divulge my fangirl nature to this wider audience, but I was pleased at the congruence of events nevertheless!

After breakfast and Char Booth’s plenary: more sessions, where I scrawled now incoherent notes in my mini LOEX notepad. Then lunch, where I randomly found myself next to Andy Burkhardt, writer of the wonderful blog Information Tyrannosaur. He was so fun! I wish I had had longer to chat with him (not to mention eat the overwhelmingly good food) but I was uprooted prematurely by the necessity of setting up my binder clip-tastic poster.

Directly following lunch was the first of the poster sessions. The schedule was set up so that there were two 30-minute periods set aside for people to meander around the lobby area and survey our intrepid work. The first was from 1:15-1:45, the second from 3:40-4:10. Sara and I set up our posters so that we were directly across from one another.

It turns out that 30 minute chunks of time rush by. There are many different types of poster surveyors: some don’t look at your poster but make a beeline for you, some skim the poster then chat, others stare grimly at your poster before turning around and walking away without so much as a peep (okay, so that was only one person). I developed a permagrin so that I could appear open and inviting. I got pretty warm in my blazer, despite my lack of interest in overheating–oh how the body betrays. Some folks lingered beyond the 30-minute window, so I missed the next session of talks.

I talked to lots of people who were genuinely excited about my ideas. I heard comments like, “I’m so glad you did this–I’ve been looking for ways to use Google in the classroom!” …multiple times(!). This meant a lot to me. Of course, there were some who lightly challenged my ideas, which I also appreciated because it gave me a chance to defend my ideas against other ideas about how the library presents information sources to users.

Here’s the part where I could chat a bit more about the content, the meat behind my flimsy little poster. Get beyond the “here’s what happened at LOEX” nature of this post. However, I’m actually going to save that for another day. This post has been lingering as a draft for too long! If there’s interest, I’m happy to post my handouts in their entirety soon and discuss this in more detail.

After the poster sessions, I was wiped out. I had a weird headache and my feet hurt. I escaped back to the hotel room to rest a little. It’s amazing how a poster session that I wasn’t truly nervous for and in fact enjoyed could have such a depleting effect. I attributed it to the adrenaline. That evening we concluded our long day of conferencing with bar-hopping in the German Village. We met some local characters, including a bartender named Shifty and a pool-stick-breaking, fedora-wearing fellow named Johnny. PBR, darts, jukeboxes, good conversation. After close to complete immersion in library-related things, the normalcy was nice. The next morning, Saturday, Sara and I went to a session or two before heading back to Bloomington.

LOEX will be in Nashville, TN, next year. Maybe I’ll go. It’s within driving distance at only 6 hours away. I very much encourage library students with an interest in instruction to go. Especially now that I’m looking at student registration fees for other conferences, at $95-125 for students LOEX is dirt cheap. The food alone is worth it! Certainly if there are any questions about LOEX I’d be happy to answer them.

I’ll follow up with more on my ideas about Wikipedia, Google and library instruction soon.