On Friday, November 4th, I had the pleasure of attending the fall 2011 meeting of INDIGO, a statewide special interest group for librarians or specialists who regularly deal with gov docs. The meeting was held in Indy at IUPUI’s University Library.

I was able to catch a ride with Andrea, a cataloger here at IU, and John, who works in technical services. The drive was beautiful–the fall foliage still holding strong!–and a lot quicker than I was expecting. I didn’t get to see too much of Indy since IUPUI is right downtown, but I must say, it was a perfect day to experience it. I didn’t even need a coat, which I’m definitely not used to in November.

The INDIGO meeting was relatively small, probably about 15 gov docs librarians in all, plus myself and two other IU-B students who are doing internships with Lou Malcomb, the elected head of INDIGO for the year. With Panera bagels and OJ to begin the meeting, I was an exceptionally happy girl.

The group dove right into the agenda. Because I came in with very little understanding of what the group did, I appreciated this. Minutes from the spring meeting, reports from various members, and new business were all discussed in turn. I ended up using the minutes from Spring 2011 as my notepad and took crazy counterclockwise notes that spiraled around the text (that are now partially indecipherable to me, naturally). Issues I hadn’t previously given any consideration to came up: How to measure use of electronic government data? How to smooth the transition from MARC to MODS/DCMI? How many physical copies of government records are sufficient on a statewide level?

Beyond the obvious results of attending the INDIGO meeting, such as picking up some gov docs lingo and meeting librarians and information professionals from around the state, I also feel that I gained insight on meetings and group dynamics. As a student you can memorize a list of terms and as a professional you can get your job duties down to a science, but if you’re not able to transfer your individual actions and role to a group setting, you’re severely limited. The importance of cooperation wasn’t a new concept to me, but I did appreciate seeing a group in action that functioned effectively (especially given that similar groups on state and national levels that functioned ineffectively came up several times during the meeting). Clear leaders emerged among the group, though it was apparent that everyone’s opinion was valued. I also noted that the ages of the INDIGO members varied from new post-MLS librarians to older professionals; Lou Malcomb also mentioned this, saying it was a strength of INDIGO, and I agree.

Oh, and a random observation: I’ve known for a while that libraries really love acronyms, but when libraries intersect with governmental agencies apparently that number skyrockets! CIC, ARL, ACRL, DLC, ICPSR, FDLP, GPO… some familiar, most not.

We took a break for lunch, which allowed for a nice walk through Military Park to a nearby cafe. After lunch, two of the librarians presented in a University Library computer lab. One presentation covered an idea to create an INDIGO LibGuide and the other provided a run-through of how to use American FactFinder2, which I think might be useful in future library instruction sessions. 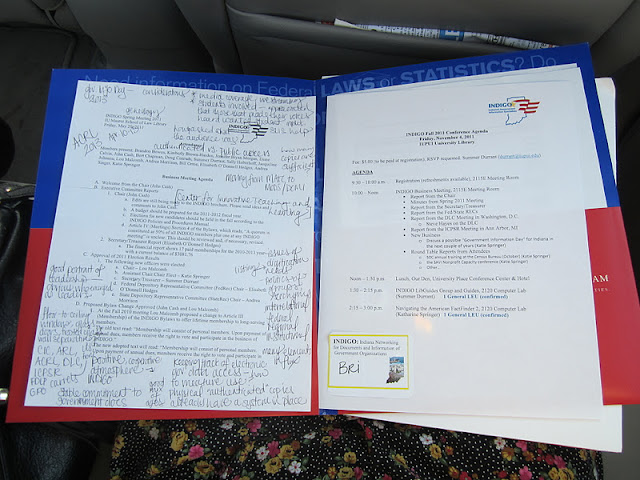 By 3 PM, the meeting was over and we headed back to Bloomington, though not without a stop at an apple orchard for cider!