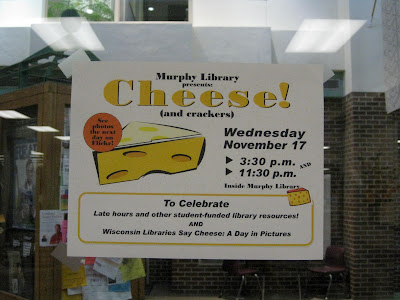 On Wednesday, November 17, Murphy Library sponsored a day filled with cheese to celebrate both student-funded library resources and “Wisconsin Libraries Say Cheese: A Day in Pictures.”

Cheese was given out in Murphy at both 3:30 and 11:30 PM. It could very well be that the students who enjoyed said cheese weren’t exactly sure why it was being handed out, though it wasn’t for lack of trying on the librarians’ part. There was a good amount of advertising in the library and around campus. Still, I’m pretty sure many students just happened to be in the library at the right time, and let’s face it: most students see a table with food being freely offered and any deeper significance goes out the window. I’m still not sure students understood the two reasons cheese was being offered. 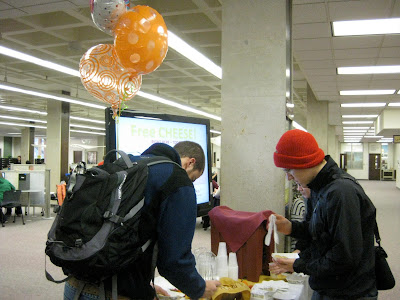 The first reason was to thank students for voting to fund Academic Initiatives (AI) this past spring semester. In spring 2010, students voted to fund not only Murphy Library but the Academic Advising Center, Office for Campus Climate, a diversity recruiter, undergraduate and graduate research, the Disability Resource Center, Learning Centers, and the Violence Prevention Office. Several of these offices and programs would have lost funding if not for students’ vote. Murphy Library in particular benefited from an increase in funds to broaden its usefulness to students.

Eleven weekend and night hours per week were added to the Murphy Library schedule due to students voting yes for the Academic Initiatives. Additionally, new databases and e-journals (including the Historical New York Times, dating back to 1856, which I just may have to check out for myself) were added to the many online resources that Murphy already offers students.

For more information on the ways that AI has impacted Murphy, check out this link:
http://libguides.uwlax.edu/studentfunded

The other reason that cheese was being given out on this particular day was that throughout the state, Wisconsin libraries were celebrating on November 17. “Wisconsin Libraries Say Cheese” was a statewide campaign to bring together pictures of all of the participating libraries, connecting Wisconsin libraries that may be separated by distance and virtually bringing public and academic libraries together through Flickr as a visual reminder of their importance to communities throughout the state. This is why anyone who got cheese in Murphy probably saw myself and Teri Talpe taking pictures – so that Murphy Library could join other Wisconsin libraries that participated.

More information (and pictures!) can be found here:
http://www.wisconsinlibraries.org/saycheese/

At 3:30, students seemed a little hesitant to come up and get some cheese, but a small line slowly formed and the cheese was gone fairly quickly. However, at 11:30 at night, it became apparent that the students had eagerly awaited the cheese: a long line formed almost as soon as Anita and Stefan set the trays out. Unfortunately several students chose to load up a few cups full of cheese cubes for themselves, so the cheese was not as evenly distributed among the students… even so, I’d say it was still quite the success.