I am firmly convinced that Special Collections is UW-L’s secret treasure. It’s right out in the open, yet so few people seem to know of its existence. Located on the opposite side of Murphy as the entrance to the main library, SC tends to get overlooked. It doesn’t help that there’s a whole set of procedures to slog through in order to even enter: first you have to ring a doorbell and be buzzed in, then you have to sign in as a registered guest, then you have to leave your bags in a locker near the entrance. By the time you get to sit down you’ve been stripped down to a pencil, piece of paper, and whatever else you need to complete your research. It’s all a bit overwhelming for the student who is merely curious and has no formal research to do. And yet these steps (which do not include a pat-down or full-body scan a la airport security, thank you very much) ARE necessary to protect the books, documents and miscellaneous items in SC. They are not done merely to make visitors feel like a suspicious and untrustworthy outsider. I promise. 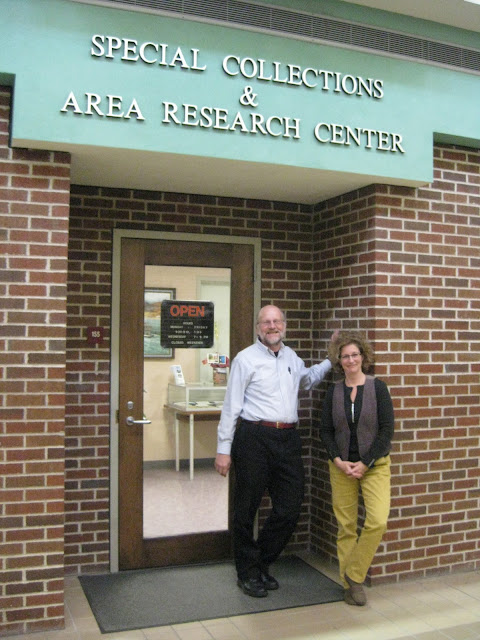 This is Paul Beck, Director of SC, and Teri Talpe, SC librarian. 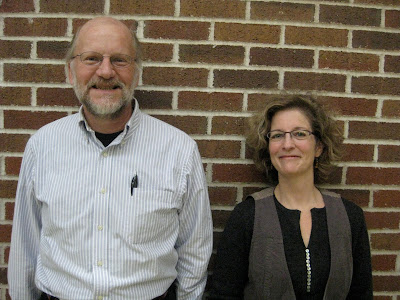 They pretty much run the show. They not only keep a watchful eye out for sneaky intruders, but they also manage to keep student workers and pesky volunteers (ME!) in line, and do the important work of archiving and helping researchers with their needs. 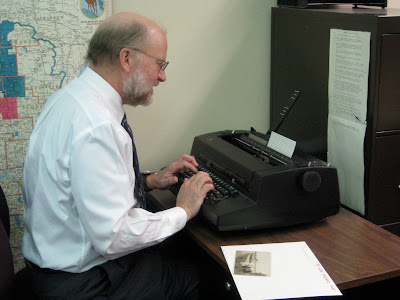 Some quirks about Paul: He can often be found downtown at the Bodega, which is basically his natural habitat. In addition to loving most things about beer, he collects brewerania.  He has been accused of crossing that fine line between a collector and a hoarder!  Paul is also an avid bicyclist and he combines those two interests by collecting bicycle jerseys from microbreweries and brewpubs.  Here’s an example of one in his collection:
http://stonecompanystore.com/store/product/38/ABA-Cycling-Jersey–LG/ 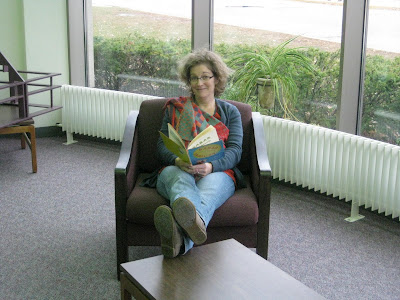 Some quirks about Teri: She majored in French at UW-Madison, and after graduating took off to teach English in Beauvais (north of Paris) at an engineering school, as France does not have campuses like ours where all subjects are taught on the same campus.  She had her 3 kids in France and took up playing the flute again after a long lapse.  She attended the Conservatoire National de Beauvais and played 1st chair flute in a regional philharmonic orchestra for 10 years. Her new French hubby Jean Luc is an excellent crepe-maker, jazz guitarist and refers to her as his muse – how’s that for romantic?
So now that you know the main players…
Welcome to Special Collections 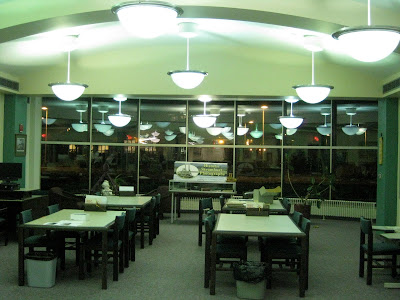 Have you ever glanced over at Murphy Library while walking from the Rec to Wimberly? If so, you’ve surely spotted the large curve of windows that makes up Special Collection’s back wall. Perhaps you’ve even thought, just like I did before volunteering in SC, What could be in there?
If you come into SC, you will sit at one of these lovely tables to do your research. During the daytime natural light fills the room from those big windows and believe me, it beats the florescent lights in this picture.
It’s hard to know where to start with Special Collections. There’s so much interesting stuff to be found here – some of it predictable and other things not so much. If you’re a researcher you have the easy part. Assuming you know what you’re looking for, all you need to do is tell a staff member what you want and they’ll fetch it for you (everything in SC is non-circulating).
Clerk’s minutes for Vernon County? Okay. 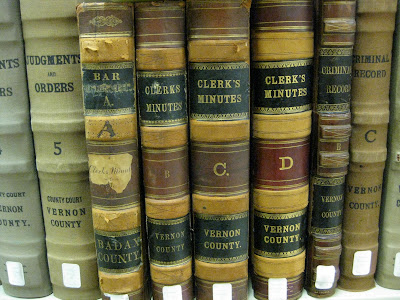 An old copy of The Racquet? Yup. 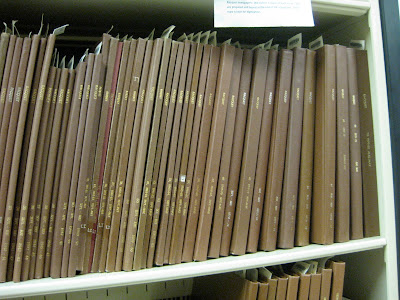 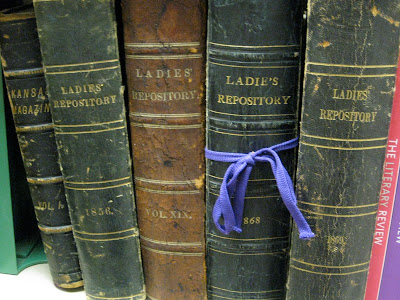 Petitions and Records? Sure. 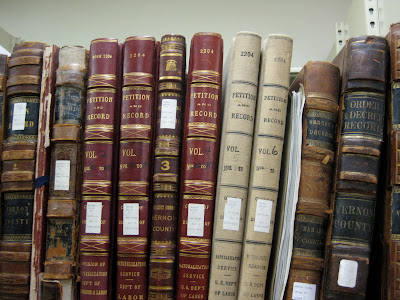 Need a rare old copy of one of Mark Twain’s books? We can do that.
(The Mark Twain collection was a donation from a gentleman’s private collection in Madison.  He thought that our river city library would be an appropriate place for it.) 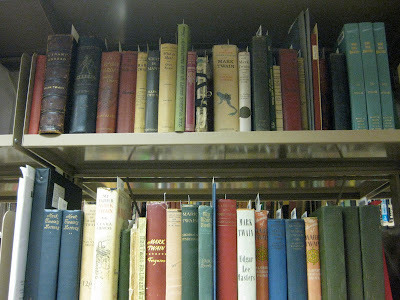 Or perhaps you’re in the market for an old JCPenney catalog? That’s here too!
(Wondering why we would keep old department store catalogs around? Students doing research on what particular goods cost in a certain year may find them useful.) 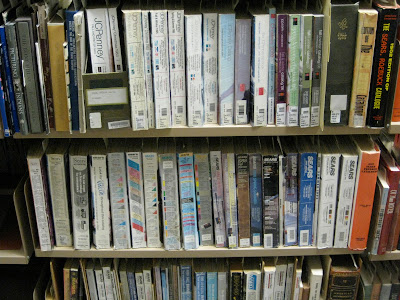 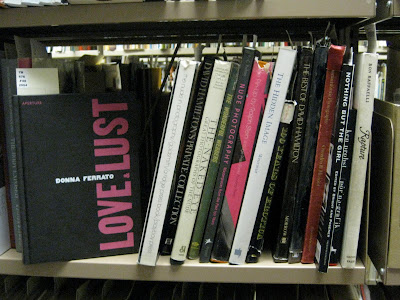 Art students, perhaps. But do these art students know that these books exist here? Not until now!
I’m hoping that SC will now have an influx of students suddenly taking a renewed scholarly interest in the fine art of documenting the human form in all its unclothed glory. You’re welcome Paul and Teri :)
There are many more interesting things in Special Collections, such as:
Sanborn maps 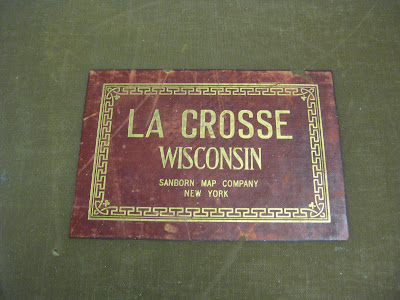 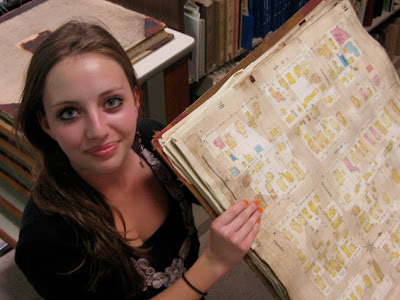 Sanborn maps were created by the Sanborn Insurance Company to assess buildings and houses for fire and other damage.  They were produced from the mid-1890s to around 1970 for many towns and cities and are now used by primarily by researchers and architectural historians.  They can often be the missing key in researchers’ puzzle solving.  When Sanborn updated a map, they often just glued on patches instead of producing a whole new book (as evidenced by the patchy look of the map in the above photo).  The buildings and houses are colored according to different categories (brick, wood, stone, etc.) and have intricate legends.
They are truly fascinating to look at. If you come to SC without a specific purpose, I highly recommend checking these out.
Bibles 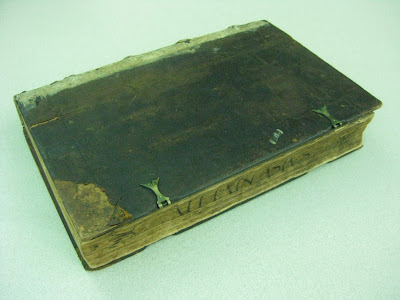 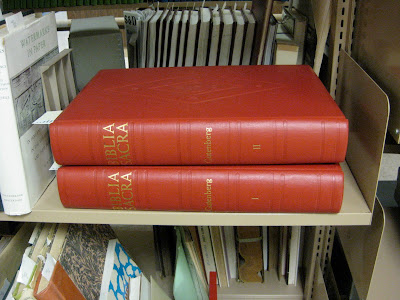 While wandering around in the oversized books section of the stacks, I found these large scarlet tomes. Beautiful, pristine, untouched. I could tell they had never been opened. That’s the thing, again, about beautiful (and expensive) books: they get put away on a shelf and are promptly forgotten. Suddenly they’re too good to be touched. So what is the point of their existence, then? To be there just in case? To retain their pristine status and be worth more to SC when our great-grandchildren are running it? I’m not sure. Anyway, the Biblia Sacra here was lonely. It was beseeching me, saying, Brianna, I know you don’t understand Latin, but you love books and paper and fonts and text so please, just open me. 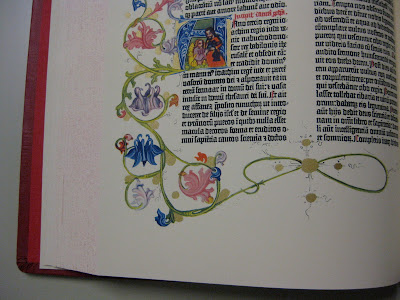 I did. Couldn’t resist, and why would I force myself to anyway? I could tell instantly that I was the first, maybe second person to ever open it. And I kept thinking, this is beautiful but why is it here in La Crosse? What is its story? 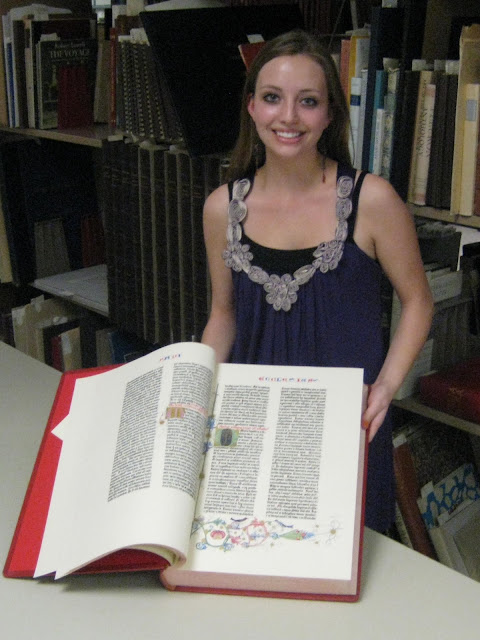 See that little white piece of paper poking out of the book, on the left side of the picture? After taking this photo, as I was closing up the book, it fell out and I read it. It said something along the lines of, “Under no circumstances should this book handled.” Figures. But the illicit handling and photograph-taking had already been committed, so I set it back in its place and refused to feel bad :) 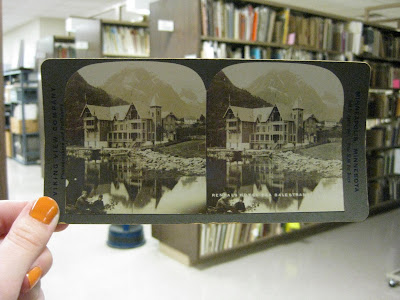 SC has a large assortment of stereoviews. This one is of Norway – chosen because I must represent my Norwegian heritage!
Stereoviews used to be the way that people enlarged their worldviews before cameras and photography became massively popular, before tv existed and before leisure travel became feasible.  The stereoscope (shown below) allowed them to see views in 3D, which added to the realistic effect. Special Collections has stereoviews on just about anything, including many steamboats. 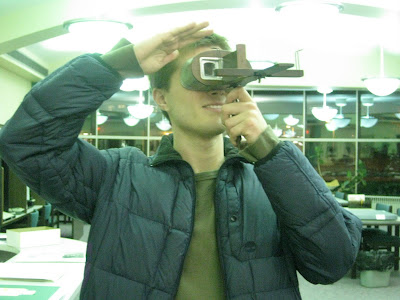 This lovely stereoscope (sans stereoview), is modeled by my boyfriend Neil. 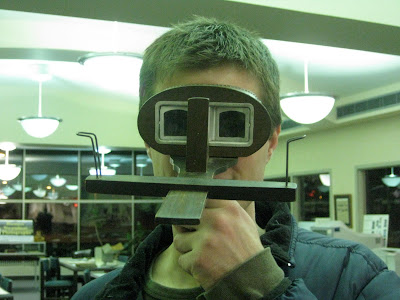 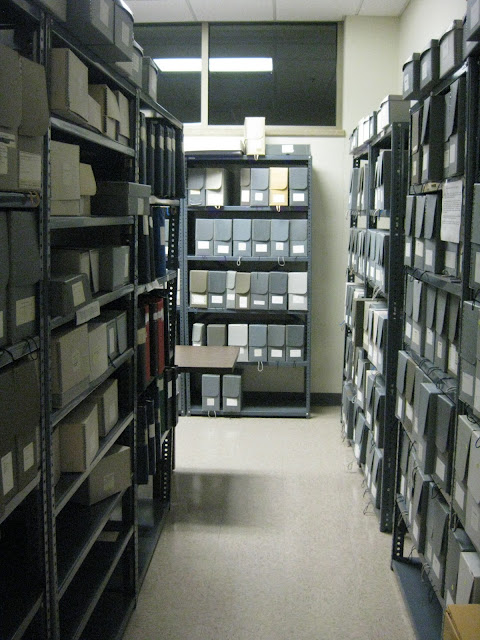 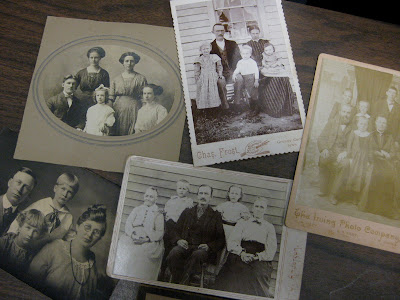 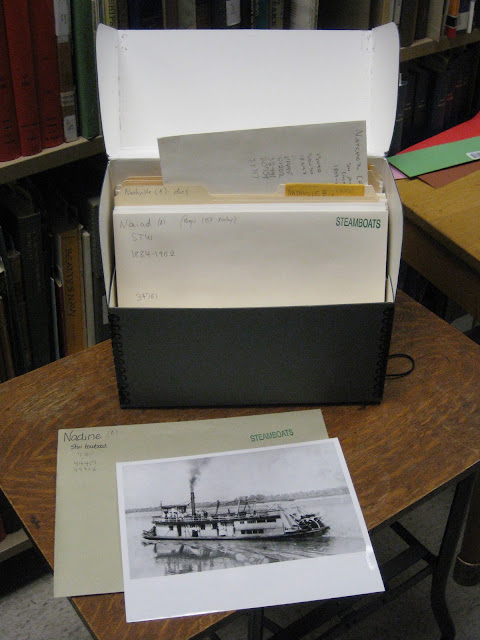 Of course, I would be remiss if I didn’t mention our SC steamboat photographs. This collection is one of the most impressive in the country and one of the main focal points of our Special Collections.
SC has over 50,000 steamboat images but will only digitize about 40,000 due to copyright reasons.    The digitization project started in 2007, and there are maybe 20,000 up online so far.  They are categorized not only by boat title but also by subjects like passengers (fascinating!), crew, pilots, interiors, and by different kinds of boats like grocery store boats, church boats, etc.  It’s a nationally known collection and Special Collections even gets reference questions from abroad.
A link to UW-L’s digitized resources can be found on the Murphy Library homepage.
http://murphylibrary.uwlax.edu/digital/missriver/index.html
Other random things in Special Collections 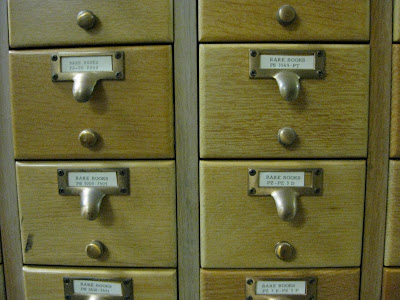 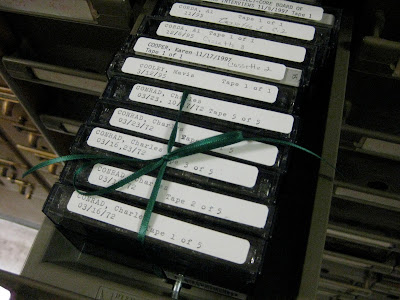 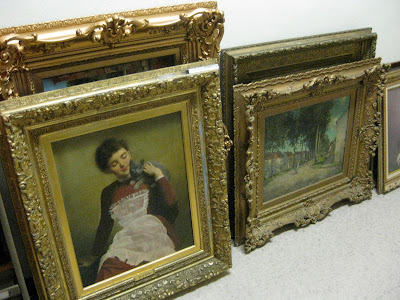 This whole post has been a love letter to Special Collections, albeit a technologically advanced one.

I love, love, love, Special Collections. I’ve been sort of adopted as the official SC pet, an unpaid lurker and obsessor, showing up at strange times to chat with whoever’s around. But as much as it’s nice to go to Special Collections each Wednesday night from 7 to 9 PM and have time to freely explore, it would also be nice to show other people (students of UW-L I am talking about you) exactly what it is that’s so amazing about this place. It can’t all be conveyed through a few pictures, and when you think about the fact that student money is going towards Special Collections, I would hope that more people would take an interest in getting their money’s worth. 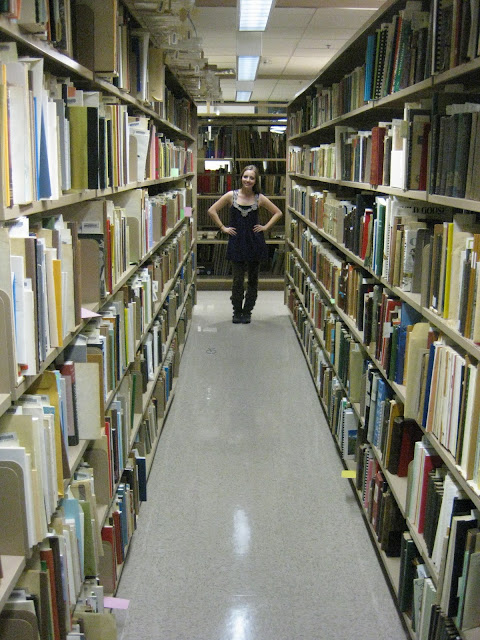 If anything, looking for things in Special Collections to photograph and write about has just further shown me how much more there is here to explore. I didn’t even delve into any manuscript collections, oral history projects, or SC’s Wisconsiana. Another post, another day.

Take Your Daughter to Work Day, circa 1999(ish)

Saying Goodbye to the Lilly (For Now)

That Slow Slide into Summer